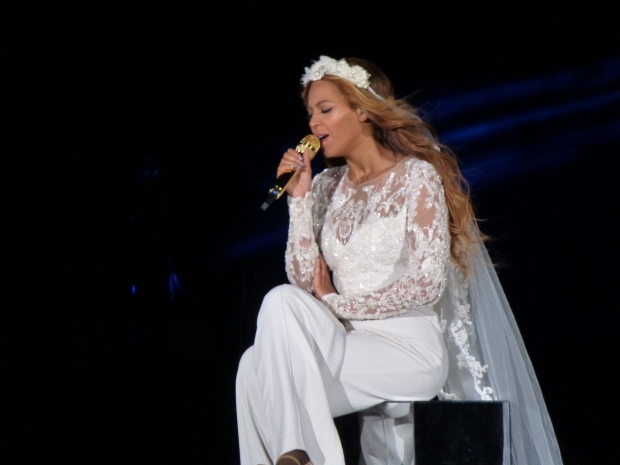 So I couldn’t miss the opportunity to talk about the buzz of the latest Beyonce’ masterpiece, Lemonade. I won’t go into how I feel about the music and short film because that is not what this blog is for. I want to talk about the message that most people will not get from what she has released. I’ll be completely honest, about 20 minutes into the video I began to worry. I thought to myself, “Oh Lord it’s about to be a lot of breaking up tonight.” I thought “well this just set men back another 20 years.” Even though I wanted to stop watching I continued, and I am so glad I did. See there is an underlying message that is in Lemonade that most people have not and will not get. If you blink honestly you will miss it.

After all of the screw you, I’m the baddest chick, all the crazy psycho talk that most women (including myself) have uttered before, Beyonce’ does something. She stays. She forgives and she stays. She didn’t put a lot into it but there is a moment when she stops lying to herself and she realizes that as much as she wants to walk away she can’t and she won’t. When I look at all the comments written under the video I see thousands of women talking about how stupid Jay-Z is and how they understand her pain and f$#& dude. No one though commented that after all is said and done, Beyonce’ didn’t leave. Now I don’t know what’s to come of their relationship but from what I saw in that video, Beyonce’ is staying. The very album that is about the tumultuous relationship was streamed on her husband’s music streaming source. Again, no one is seeing this. Some are arguing that everything is for show and that Beyonce’ and Jay are doing fine. From the emotion sang behind some of those lyrics, they were all too real. Again, people missed the fact that she stayed. No one realized that she made the conscious effort to make it work in spite of.

After everything was said and done my biggest concern was, will people get it? Will people get that she decided to forgive him and stay. Or will people just hop on the men haters club, making it that much harder for the men who do right by the women who enter into their lives. Will people get that sometimes you have to forgive things you may not want to in order to keep your marriage? For Beyonce’ it was infidelity but for others it may be gambling, mismanagement of money, neglect, lack of support or whatever may be destroying a marriage. Or will people only see Bey with her middle fingers to the sky saying she’s doing her?

I’m not going to lie it hurt me to see and hear those lyrics because I have been there. I know the hurt of infidelity but I hope to never feel it in my marriage. It is a pain that hurts the soul. I appreciate Beyonce’s transparency in letting the world into that hurt and pain. My only wish is that she would have shed more light on the healing process after the forgiveness. See many of us can talk about how it hurt us to find out the one we loved stepped out on us but no one talks about what happens once you decide to stay. See the fact of the matter is, some people stay. And quite frankly, not all of them are stupid for doing so. Are their times when people should leave, yes. Unfortunately if it is not a matter of abuse it is hard to state when those times are. I remember when a friend of mine was talking to me about some issues in her relationship. She looked at me with tears in her eyes and asked me “am I stupid?” Now had she caught me some years before I would have told her yes without an ounce of hesitation. At that time though I knew that I couldn’t answer that because I myself did not know what being stupid meant.

Take Beyonce’ and Jay-Z. Just last week people were still plastering #relationshipgoals under their pics. This week I’m sure Jay is going to get a lot of hate mail and comments about how stupid he is. Next week once they slay on a red carpet together they will go back to looking like the couple everybody thinks they want to be. Look at Gabrielle Union and Dwyane Wade. They are everyone’s #relationshipgoals now, but wasn’t no one saying that when we found out he cheated and got a chick pregnant. But as soon as he dropped on one knee and they had the wedding of the century, the masses were back on their side. See the truth of the matter is society will flow with the wind so you can’t go by what they say to do. You have to trust what God and your heart is telling you to do. We look for others to tell us if we are being stupid or not but quite frankly no one can tell you that but you. Once we learn to look at our lives through the perspective that only we live with our actions, we’ll stop seeking the validation of others.

Another thing I wonder is if this would have gotten the same praise if it were a man to have gone through this with his wife. What if Jay dropped this visual album talking about the multiple times Bey didn’t come home and when she did he could smell another man’s cologne on her body. Most of you all will say that is unlikely to happen. I hate to break it to you, it’s not. See what we don’t like to talk about is all the men who sit at home waiting for their wives to come home drunk, smelling like the next man. See not too many men will come out and share that story because society will blame him. “You must not have treated her right” or “you know you can’t turn a hoe into a housewife.” Meanwhile women have been turning hoes into husbands for years but when he cheats women get the support of the nation. Support from the same people who were crying telling her congratulations when he proposed. We don’t talk though about all the men who get cheated on constantly and stay for the sake of their marriage. Have we made staying for the sake of the relationship into a double standard?

I also couldn’t help but notice how the comments under the Lemondae video put everything on Jay. Now hear me clearly, I DO NOT condone cheating on any level. I believe it shows a lack of communication, respect and self-control. What I want to know though is why Jay has to take all the blame. When Tyler Perry’s Temptation came out it sparked the much needed debate about how neglect and complacency in a marriage can lead to infidelity. Women across the land talked about how if he would have just paid his wife a little more attention she wouldn’t have cheated. How she gave him all the signs that she wasn’t happy. Does the same not apply with men? I may get hate mail for this but I have to speak on it. Jay-Z is married to a woman who has a fanbase that can rival some of the greatest to ever do it. She is the most famous person on this earth. They call her King Bey. I don’t know Jay-z’s mental state but I could only imagine how difficult it may be sometimes to be the sidekick to one of the most powerful women in the world. See when he cheats he probably cheats with women who make him feel important because he feels second rate to his wife. I’m not saying it is right, but I’m just trying to give you all the psychology behind it. See when I hear Beyonce’s lyrics, she speaks a lot about how she tries to spice it up in the bedroom and how sexy she is but she mentions nothing about how she reminds him on a daily basis that despite what her fans say he is her king. See good looks and bomb sex will indeed keep a man’s interest. It has to be balanced though with showing you support and need him. Constantly reminding him how important he is to you. Again, I do not know the ins and outs of Jay-Z and Beyonce’s marriage but I’m just using this glimpse into it as a catalyst to speak on broader issues.

My hope is that these two will be able to work through whatever is plaguing them in their marriage. An even bigger hope though is that we do not take their situation and try to make it our own. Just because someone stayed doesn’t mean you have to. Just because someone left, doesn’t mean you have to. We have to learn how to simply appreciate when people are being transparent and not look to it as a blueprint. We also have to learn to look at the bigger picture of the transparency. Don’t get caught up and make decisions based off the chapters and pages that you miss the entire message of the book. If you get the message, don’t misconstrue it to be a step by step guide for you. We all have our own stories and only we can decide and have to deal with the endings we write for ourselves. So be sure to write an ending that you can live with, but most importantly tells the story you want to convey.

18 thoughts on “Lemonade: What no one else is seeing…”