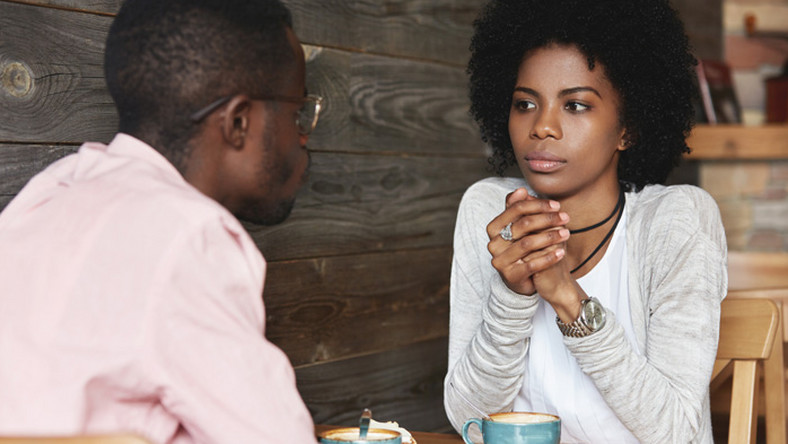 The phrase “we need to talk” is one of the most nerve-wracking phrases to hear, especially while dating or in a relationship. It’s the phrase that will have you thinking all day about every possible scenario under the sun. After years of conditioning, we’ve turned “needing to talk” into a thing of dread.

While this phrase can cause a lot of worry, I want to shift the connotation connected to these words. I know this may be hard to believe, but “needing to talk” is probably the most important thing you can do, and the earlier the better. I’m sure these triggering words are making it difficult to follow how I could possibly come to such a conclusion.

One of the biggest mistakes I have seen my clients, friends and even myself make when starting off in the earlier parts of dating, is that we are not having the necessary “talks.” We continuously say that “communication is key,” yet keep avoiding communication altogether. We’re not talking. We’re dancing around and avoiding at all costs to keep things light. If we are talking, we’re keeping it trivial. We’re asking for favorite colors and sports teams, meanwhile, the deal-breaking information has been sidestepped.

Don’t get me wrong, this is fun information to ask and it does help to get to know more about this person. It creates conversation which is a good thing. I’m just trying to challenge us to get the hard, important stuff out the way early. In essence, I’m saying, “we need to talk.” For instance, when I was taking time from love, see my previous post here for the details of that, I would say pretty early that I was not interested in dating. I would ask guys if they were and let them quickly know that I wasn’t. One guy told me “this is a little early to have this conversation,” while another said, “I didn’t think we were at the place of having this discussion.” I was so baffled. If you are interested in trying to date someone, wouldn’t you want to know as soon as possible if they aren’t interested in the same?

I soon realized how many people, including myself, had fallen for this backward way of thinking. We want to get to know a person first to see if we’ll like them and then ask the tough questions later. I can hear some of y’all now. “Why have such deep and real conversations with someone who you don’t know you’ll like or if they’ll be around much longer?” I’m glad you asked. The flaw in this thinking is a few things. One, what happens if you start liking this person. You realize you two are vibing and they seem great thus far. So you decide to start asking the real questions, the things that could make or break it for you, and then BOOM. They tell you they don’t want kids, or that they have five. They tell you they aren’t interested in a committed relationship or that they don’t believe in monogamy. Maybe you’re religious and they don’t believe like you believe. Regardless of what your deal breakers are, this person, whom you have grown to like, has just revealed your deal breaker to you. Now you feel devastated, frustrated, annoyed, hurt, sad, angry, or whatever else comes to mind. You wish so desperately that their answer was different, but it remains the same.

Some may say this sounds extreme, but the truth is, this happens every day. I know couples who avoided vital conversations. Now that those things have come out, the information is tearing their relationships apart. Why? Because the information is such that if they had known before, they wouldn’t have gotten with them. Since they didn’t have the conversations sooner, they’re struggling to walk away from someone they care about. The sooner you have these discussions, the sooner you know what you are dealing with. Think about it, if you have the tough conversations early, you won’t be nearly as hurt, or hurt at all, if that person has some deal breakers.

Truthfully, we tend to struggle to feel comfortable while getting to know someone when we know we’re not asking the real questions we want to know the answers to. We fear looking like we’re “doing too much” so we sit, silently wondering if the “right time” will present itself to bring it up. Or we do even worse and hope they bring it up so we don’t have to. Listen, whatever information you need in order to make an informed decision about this person, get it!!! Why guess and worry if they are going to sadly disappoint you later when you can just ask now? Plus, you may be pleasantly surprised.

Let me make a disclaimer. I’m not telling you to ask questions that they may not know the answer to like “can you see us together” and y’all only been talking for two weeks. The discussions I’m referring to are ones that help both of you make informed decisions about whether you should continue getting to know each other. These are discussions that can stop you both from wasting time with as minimal emotional pain as possible. It also keeps you from settling in areas you know you emotionally can’t handle because you were in too deep before finding out.

Look, I know having serious conversations can be awkward and daunting. This is exactly why it’s better to have them with someone you’re not emotionally attached to yet. Get the tough stuff out of the way. This way, you can better enjoy getting to know them, knowing they’ve already met some of your toughest criteria. So stop fearing and guessing and get the answers in the most effective way. Just ask!!! Better now than later. Happy talking😊